The tax reform legislation which recently passed Congress will affect most households and businesses in Wisconsin.  The centerpiece of the legislation was the major reductions in business taxes, with a cut in the corporate tax rate from 35% to 21% and a 20% deduction on the income earned by pass-through businesses which pay on the individual returns of their owners. (Wisconsin Senator Ron Johnson was a key contributor in securing the pass-through provisions.)  While the business tax changes will be the most significant economically, most taxpayers in Wisconsin will more directly and perhaps more immediately feel the impact of the changes to the individual income tax code. These changes include reductions marginal tax rates and substantial changes to income tax deductions. This post attempts to gauge the impact of these individual tax changes for Wisconsin taxpayers.

I find that a broad range of taxpayers in Wisconsin would receive tax cuts that would lead to increases in after-tax income of 2% or more. Taxpayers with business income, particularly those with partnership or S-corporation income which is concentrated at high income levels, would receive larger gains, of 4% or more. These gains are similar to what microsimulation analyses by the Tax Policy Center (nationally), the Institute on Taxation and Economic Policy (nationally, scaled to state level) have found.  But rather than microsimulation, my results are based off summary statistics for Wisconsin tax returns from the IRS.

In addition, the changes in deductions could substantially alter behavior.  In 2015, 31% of Wisconsin households itemized tax deductions, but under the new system this fraction will fall dramatically, likely to less than 10%.  While most households will be better off after this change, the lack of deductibility will increase the marginal cost of housing, charitable deductions, and state and local taxes.  This has the scope to change behavior substantially, affecting the housing market and by downward pressure on prices, and leading to increased pressure for state and local tax reform.

Importantly, I only look at changes in 2018 and only evaluate the impact on representative households, ignoring most behavioral changes and any dynamic feedback. I also only look at the individual changes, although the bulk of the corporate tax cuts would be passed on to households either as shareholders or workers.  Further, a key component of the tax reform legislation is that the individual provisions end in 2025, so unless extended by future Congresses these gains would dissipate. Moreover, they dynamic impact of tax reform, particularly on businesses, could lead to changes in overall economic activity which would affect incomes.  The size of this impact has been a key issue in the recent debate. 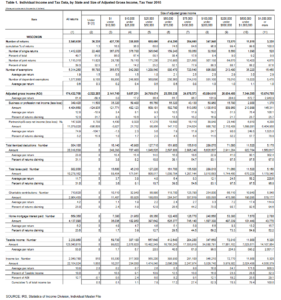 Table 1 above summarizes tax returns from Wisconsin for 2015, the most recent data available.  This table is taken from IRS Statistics of Income public release, with some additional summary calculations.  The columns consider different income brackets, while the rows provide summaries of income, deductions, and taxes.  While the cross-tabs into income levels help to characterize the distribution, the averages mask the heterogeneity and skewness within each cell.  Nonetheless, the averages are still informative about the distribution of income and taxes in the state, and thus the impact of tax reform.

For example, the first column shows that there were 2.84 million returns filed in Wisconsin in 2015, 49.7% of which were single, 39.3% married filing jointly, with the remainder (not shown) being head of household. The average income (AGI) on a return was $61,400.  31.1% of returns itemized deductions, with almost all of those claiming deductions for state and local taxes (31% of all returns), and most itemizers also claiming deductions for charitable contributions (25% of returns) and mortgage interest (23.6%). The average amount of federal income tax paid was $10,800 for an effective tax rate of 12.7% of AGI.

The other columns in the table break out the income, deduction, and tax categories by income ranges. There we see that most returns with incomes below $50,000 are single returns, while roughly 88% of households making more than $100,000 are married filing jointly.  Across income ranges, there are on average relatively few dependent exemptions claimed on average, with less than one for incomes under $100,000.  Unsurprisingly, itemizing deductions becomes more common with higher incomes, reaching a majority for those over $75,000 and with over 97% of those over $200,000.  The progressivity of the tax code also shows, as the effective tax rate increases from 2.4% in the $10-25,000 range up to 29.1% for incomes of $1 million or more.

In fact these 5,330 millionaires make up the top 0.2% of Wisconsin taxpayers, but pay 20.6% (or $4.6 billion) of all federal income taxes in Wisconsin.  These high income taxpayers also largely include pass-through businesses, as 78.8% of them have partnership or S-corp net income. This also accounts for a substantial portion of their income: the average income of this group is $2.94 million, with $1.53 million on average for those with partnership/S-corp income.

The distribution of business income is highly skewed, but also includes many taxpayers at lower income levels.  This is particularly true for partnerships/S-corps, where the majority of income is earned by those in the $1 million + range, but roughly half of them are claimed at incomes below $100,000.  Business and professional net income is more broadly distributed, being claimed by 10-20% of taxpayers at income levels from $10,000 to $500,000.

There are three major categories of changes in the recent tax reform which will affect Wisconsin taxpayers:

In Table 2, I evaluate the projected tax changes for representative tax payers in the different income groups from Table 1 above. I exclude the two lowest income groups who pay very little tax (0.1% of the total paid, and effective rates of 0.5% or lower).  The main provision affecting these groups would be the increased amount of the refundable child tax credit.  The child credit was doubled to $2000, of which $1400 is now refundable.

For the other groups, I constructed representative tax payers and evaluated their taxes using Maxim Lott’s Tax Plan Calculator (http://taxplancalculator.com/). As we saw above, for incomes over $75,000 the majority of returns are married filing jointly, while there are more single filers at lower income levels.  Further, we saw that there was a single dependent claimed on the average return, so for incomes above $75,000 I used married couples with one child, evaluating the average income and taxable income in the range, and calibrating deductions to roughly match the average levels in the table.  The majority of filers below $75,000 currently take the standard deduction, so in those lower ranges I evaluate both single filers and married filing jointly with one child having the same income.

A few observations stand out: first across broad income ranges the tax reform results in after-tax increase of 2.2-2.4% for married couples and at least 2% for single filers at all but the lowest income levels.  At low incomes, the main impact is the increased child deduction refundability, while across the broad middle of the income distribution the main impact is the increased standard deduction coupled with lower tax rates.

The business tax changes, particularly for partnership and S-corp income which mostly affect the top two income groups, as a majority of those earning over $500,000 claim this income source.  The 20% deduction on this income leads to a higher overall reduction in taxes at the top end, including a 5.4% boost for a representative household in the over $1 million range. As roughly half of the income is business income, this reflects the lower effective business tax rates being passed through to the owners.

Finally, while all of the taxpayers in these calculations saw gains, their behavior may be impacted by the change in deductibility.  In particular, the cap on the state and local deduction combined with the increased standard deduction means that many fewer households in Wisconsin will choose to itemize their taxes.  In particular, of the representative cases above, only those with incomes above $500,000 would find it worthwhile to itemize. For example, from Table 1, the average itemized deductions was $22,900 in the $100-200,000 range, while the new standard deduction for married couples is $24,000.  Moreover, while deductions are currently higher at $41,000 in the $200-500,000 range, the cap on state and local taxes binds (as the average is $24,500) and makes the standard deduction still larger on average.  Recall that only 3.2% of taxpayers in Wisconsin had incomes over $200,000, so clearly there will be a major reduction in itemizing.

Of course these averages likely overstate the effect, as households with lower incomes but relatively large deductions will still find it worthwhile to itemize.  But it is hard to foresee more than 10% itemizing, rather than the 31% currently.  While taking the standard deduction would simplify the tax filing process, it will also affect behavior on the margin.  Losing the deduction will increase the marginal cost of charitable deductions, mortgage interest, and state income taxes.