By: Noah Williams, Center for Research on the Wisconsin Economy

In this blog I highlight the findings of my recent report with Junjie Guo on the costs of Medicaid expansion in Wisconsin, and illustrate our results for Wisconsin and its neighboring states. I also discuss, as in our report, evidence from Sen and DeLeire (2018) that insurance premiums on ACA exchanges were lower in Medicaid expansion states which has been touted by supporters of Medicaid expansion. I show that evidence is largely irrelevant as it analyzes premiums that are paid by very few consumers. In the most recent enrollment period 96% of consumers in Wisconsin received advance tax credits lowering the cost of the plans analyzed by 88.5%. Thus for the vast majority of consumers the pre-credit prices which were analyzed are meaningless.

Overview of our results:

The potential expansion of Medicaid has been an important topic of debate in Wisconsin over the past several years, reaching new heights this year. In 2014 Wisconsin settled on a partial Medicaid expansion, where all individuals up to 100% of the Federal Poverty Line (FPL) are eligible. This stopped short of the full expansion up to 138% of FPL under the Affordable Care Act (ACA) which would bring increased federal funds. Governor Evers campaigned on a platform of expanding Medicaid, and after his election Medicaid expansion was a key pillar in his budget. However the state legislature has remained opposed to the expansion, and recently passed a state budget without Medicaid expansion.

In a recent CROWE report, Junjie Guo and I analyzed the impact of potential Medicaid expansion on private consumers and health providers. Costs of expansion arise because Medicaid reimburses health care providers at a lower rate than private insurance. With more people on Medicaid, health care providers would receive lower payments for services, which could push up premiums for private insurance. Moreover, increased public insurance at no cost and with no deductible would likely increase usage of medical services, with the increased demand putting additional cost pressure on providers. The potential benefits of Medicaid expansion come from a reduction in the uninsured rate, and in turn, lower uncompensated care costs incurred by health care providers.

We considered two different methods for assessing the net private cost of Medicaid expansion: one directly examining the impact of increased Medicaid enrollment on private insurance premiums, and another where we looked at costs associated with some consumers switching to Medicaid from private insurance versus the benefits of lower uncompensated care costs. Following expansion many states have experienced Medicaid enrollment which far exceeded projections, so we also looked at three different enrollment scenarios: the state administration’s projections, estimates from Census data, and projections from the Urban Institute with greater enrollment. Our results are summarized in the table below. In each case we find net costs – up to $184 million – which increase with the size of the new enrollment and the share of the new Medicaid enrollees who previously had private insurance. 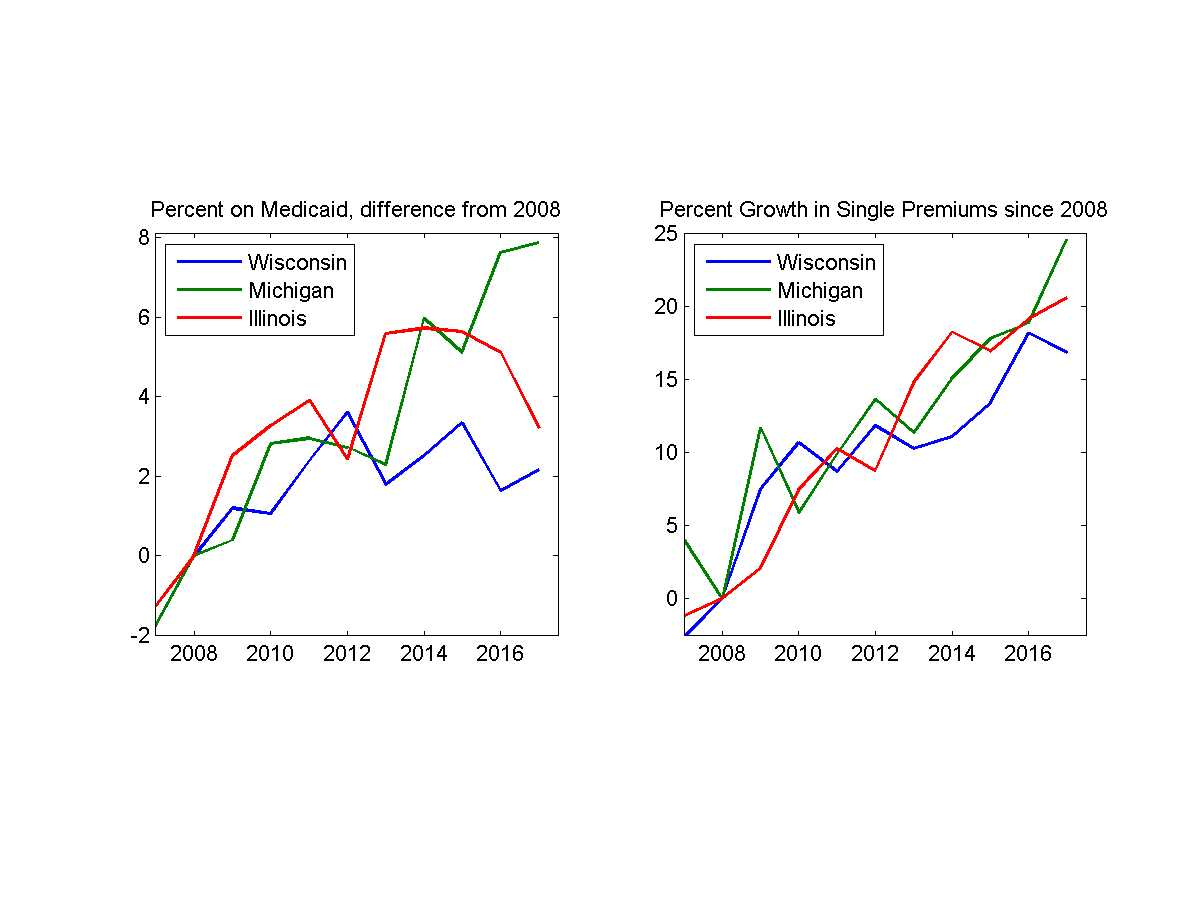 Figure 1: The difference in the percentage of the population on Medicaid since 2008 (left panel) and the growth in employer-provided single premiums since 2008 (right panel) in various states.

In the report we provide a formal empirical analysis, showing that increased enrollment in Medicaid leads to higher premiums on employer-provided health plans. Here we illustrate the results for Wisconsin and some of its neighboring states that expanded Medicaid. The figure above shows the difference since 2008 in the fraction of the population on Medicaid in Wisconsin, Michigan in Illinois, along with the growth in premiums on single employer-provided health plans since 2008. Michigan and Illinois both chose to expand Medicaid, while Wisconsin did not.[1] Figure 1 shows that until 2012-2013 the Medicaid shares in the states roughly tracked each other, and over that same span insurance premiums grew at roughly the same rates. However in 2013 a gap in both measures opened up: Medicaid enrollment grew in Illinois and Michigan but remained roughly flat in Wisconsin, while insurance premiums grew faster in the expansion states. Moreover the patterns roughly match: Illinois had a large increase in Medicaid enrollment in 2013-2014 and at the same time it saw premiums increase more rapidly, while Michigan saw sustained Medicaid enrollment growth from 2014-2017 when it saw rapid growth in insurance premiums.

Of course this evidence is only suggestive, but it is borne out by our formal empirical results. We find that a one percentage point increase in Medicaid coverage is associated with an increase in the average single premium by a statistically significant 0.6 percent two years after the initial increase. For Wisconsin this means that a one percentage point increase in Medicaid coverage would raise the annual average single premium by about $40 and would affect roughly 820,000 consumers. Under the enrollment projections of the state administration, these premiums would increase by $56 for a total cost of $92 million. We get even higher costs of $133 million under our second approach of separately measuring costs and benefits, as 50% or more of the new Medicaid enrollees are expected to come from the ranks of the previously insured. With enrollment exceeding official projections, like many states have experienced, we estimate that costs could reach $184 million per year.

Evidence from the ACA Exchanges:

In the recent debate on Medicaid expansion, the research of Sen and DeLeire (2016, 2018) has figured prominently.   They analyzed counties in the cross-section, and found that premiums on the

exchanges were 7-10% lower in Medicaid expansion states, after controlling for a number of local characteristics. The Wakely Consulting Group prepared a report for the State of Wisconsin Office of the Commissioner of Insurance which applied their results, and Sen and DeLeire wrote an additional blog post describing and applying their research for the current debate as well. Governor Evers picked up on this research, claiming that, “Wisconsinites could be paying up to $684 more per year for private insurance than folks in states that expanded Medicaid.” Further, critics of our report from UW Health/IRP, who had apparently not read it to realize that we addressed the issue, brought up this research again. 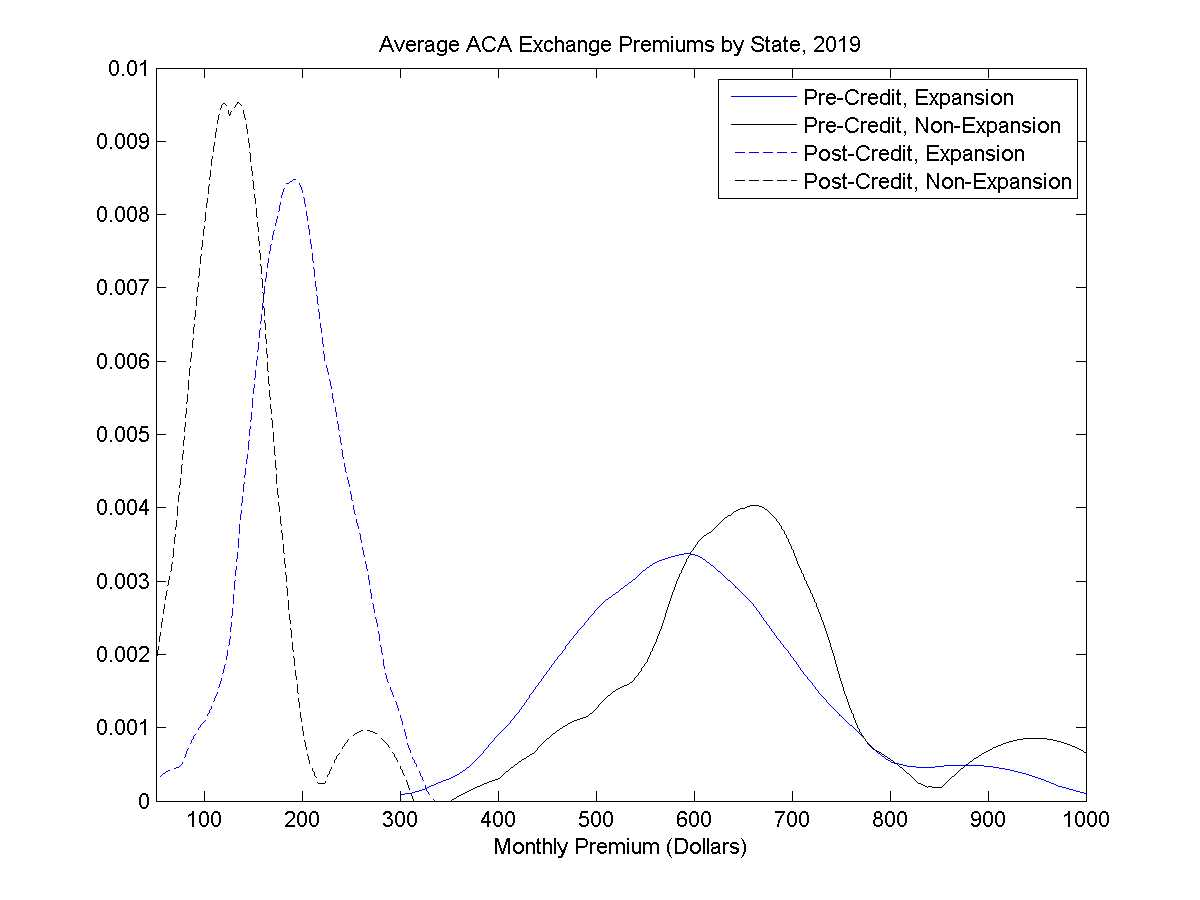 Figure 2: The distribution of average monthly premiums on the ACA exchanges in 2019, before and after accounting for tax credits.

However none of these citations or applications point out a crucially important fact about the ACA exchange markets: very few consumers pay the full premiums. The vast majority of consumers receive substantial subsidies, in the form of Advance Premium Tax Credits which greatly reduce the premiums paid at the time of purchase. Thus for most consumers, the pre-credit premium prices have little to no effect. Moreover, as we show in the report, since the subsidies cap premiums paid based on income, they remove almost all of the geographic variation in after-credit premiums. Figure 2, which is drawn from the report, shows the distributions of average monthly premiums across states. The pre-credit average premium distribution is shifted toward higher prices in the non-expansion states, consistent with the results of Sen and DeLeire. However tax credits greatly compress the distributions, and the after-credit premiums are lower in the non-expansion states, largely reflecting demographic factors and lower average incomes. Thus even if Medicaid expansion were to reduce pre-credit premiums, it would have no bearing on most consumers.

To provide further illustration, we consider Wisconsin and its neighboring states as above. In the most recent enrollment period the average monthly premium before credits for silver plans, which Sen and DeLeire focus on, was $763 in Wisconsin, $689 in Illinois, and $560 in Michigan.[1] Consistent with their results, the Medicaid expansion states had lower premiums. However 96% of purchasers in Wisconsin received advanced tax credits, reducing their after-credit average premiums to $88. In Illinois, 93% received credits and paid an after-credit premium of $139, while in Michigan it was 92% with an after-credit premium of $146. Thus Wisconsin consumers (again largely for demographic and income reasons) paid lower after-credit premiums.

Thus rather than the $684 per year savings that Governor Evers touted would accompany Medicaid expansion, purchasers of insurance on the ACA exchanges could more reasonably expect to see no effect on the actual after-credit premiums they pay. At the same time, those with employer-provided health insurance could expect to pay more.