By: Junjie Guo and Noah Wiliams

Deductions and credits in the state income tax code mean that the effective marginal tax rates, which most influence economic behavior, that people face are often quite different from statutory rates. Under current law in Wisconsin, the highest state marginal tax rates are for households just below the median income, and the phase-out of the state standard deduction increases marginal tax rates on many middle class households.

· AB 56, which was proposed in the legislature and incorporated in Governor Evers’ budget, cut taxes by increasing the earned income tax credit and introducing a new tax credit program. Increasing the EITC lowers marginal tax rates for low incomes, but its phase out increases the already high effective marginal rates for households just below the median income. The new credit program lowers marginal rates by effectively undoing the phase out of the standard deduction, but the unconventional design of its own phase out leads to high and increasing marginal tax rates on some higher income households.

Wisconsin has a progressive individual state income tax system, which features increasing marginal tax rates (the tax rate on the last dollar earned) as income rises. However other aspects of the tax code, such as the earned income tax credit (EITC) and standard deduction, change the effective marginal tax rate that taxpayers face, as these credits apply and phase out over different income ranges. In a new CROWE report we consider the case of a married couple with two children, and evaluate the net tax bill and marginal tax rates they face as income rises. 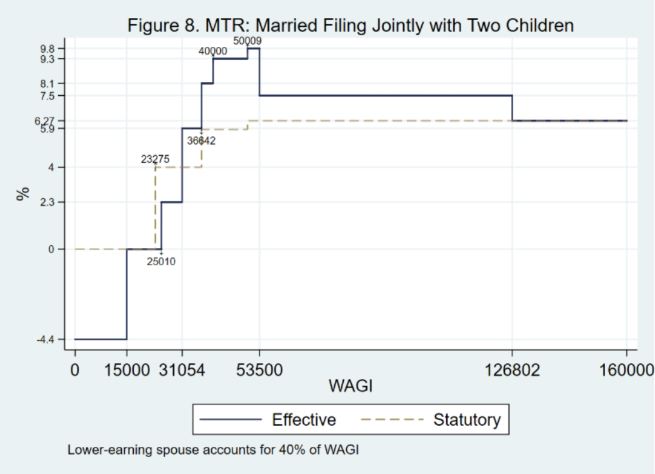 The plot above (Figure 8 from the report) shows the effective marginal tax rates for different income levels, with the statutory rates for comparison. The figure clearly shows the impact of the deductions and credits on the effective tax rates. Under current law households earning $40,000-$53,500 face the highest marginal tax rates of 9.3-9.8%, due to the phase out of the EITC. In addition, a broad middle range of incomes in the state (median income is about $59,000 for a household and $97,000 for a family of four) face effective rates well above their statutory rates due to the unconventional phase out structure of the state standard deduction.

We also evaluate two different tax reform proposals that were advanced this year, the Republican AB 4 and the Democratic AB 56. Both were aimed at providing middle class tax relief, but they were structured quite differently. While the political debate focused on how the bills were financed, they also implied very different effective tax rates, as in the plots labeled Figure 10 (AB 4) and Figure 13 (AB 56). We find that AB 4 lowered marginal tax rates for lower incomes and increased rates for a higher income range. However AB 56, which expands the EITC and includes a new credit, has a more complex impact. The plan lowered marginal rates for very low and middle incomes, but increased them slightly for low incomes and sharply for incomes in the $125,000-$150,000 range.

Overall, our results show that the features and complexities of the state individual tax code mean that effective marginal tax rates may differ substantially from statutory tax rates. Since effective rates are what matters for economic behavior, this suggests that there may be substantial gain from simplifying and reforming the state tax code. Tax reform which eliminates many of the credit programs would broaden the tax base and lower marginal tax rates, raising tax revenue while improving efficiency and promoting economic growth.