The recession of 2008 took a severe toll on households across the United States. After reaching a peak in 2007, real median household incomes fell sharply during the recession and the initial years of the recovery.  Incomes nationwide have now recovered and surpassed their pre-recession peak, but the growth has not been uniform across states or across households within a state. In an earlier post, I discussed the trends in household incomes nationwide and in Wisconsin.  Here I focus on the differences across states in household income overall and broken down by race since 2005.  There are substantial differences across states in income levels and growth rates both overall and by race.  Nationwide, African American households have experienced slightly faster income growth than white households since 2005, but in a majority of states the gap has widened. 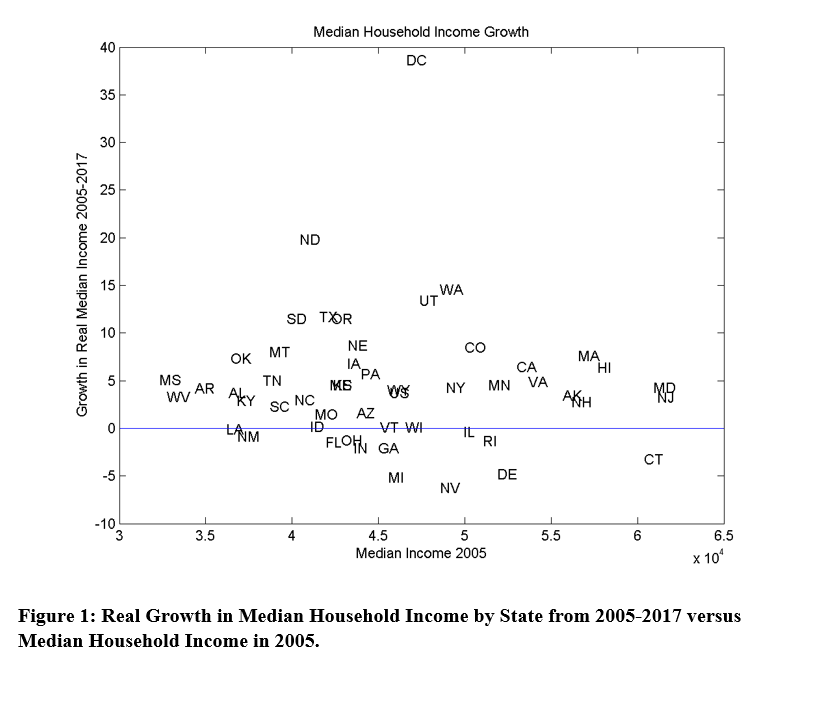 As in the previous note, I use data from the US Census Bureau American Community Survey (ACS), the government’s main annual survey providing detailed demographic data. However it is important to recall the limitations of this data. The income measure is reported pre-tax income, not inclusive of government transfers. Moreover the data here is not adjusted for changes in household composition. Table 1 at the end of this post provides a summary of the data that I draw on here for all 50 states and the District of Columbia, as well as the national average.

In Figure 1, I show the cumulative growth in real median household income from 2005-2017 by state versus the state’s median household income in 2005. Nationwide, real incomes have grown by a cumulative 3.7% over this span.  As discussed above, underlying this modest growth over the twelve year span was growth from 2005-2007, then a large decline of roughly 9% from 2008-2012, followed by steady growth over the last several years. However, as the figure shows, the cumulative growth over this span has been very uneven across states.

In twelve states real incomes were lower in 2017 than in 2005.  Nevada, which was hit hard by the housing market collapse during the recession, had the largest decline at 6.2%. However there were also many states that experienced much more rapid income growth than the national average.  The District of Columbia is a clear outlier, experiencing real income growth of 38.6%, which is far above any state.  The largest income growth of the 50 states occurred in North Dakota, where the oil boom contributed to a 19.8% increase in real income.

One of the hallmarks of many models of economic growth is that we should expect convergence of incomes across similar economies, as resources would move to areas where they are most productive. Convergence would imply that states with initially lower incomes would grow faster than higher income states, and thus the income gaps would narrow over time.  However the figure shows that there is no evidence of converge across states in the past twelve years (which would show a downward sloping pattern to the data). While I have shown elsewhere that there has been convergence across counties within Wisconsin, the same does not hold true across states. The figure also suggests that there has not been divergence either, where richer states would grow faster and income gaps across states would widen.  Instead, over the past twelve years there has been no relationship between the initial income and subsequent growth.

In Figure 2, I show how income differences across households by race have changed across states over this period.  In particular, I focus on households of a single race, and compare the Census data for white households with black or African American households.  The data for 2017 and real growth rates over the sample are given in Table 1 below.  In the figure, I show the ratio of the median income of African American households to white households in 2017 versus the same ratio in 2005.  In the figure I focus only on states where African Americans made up at least 1.5% of the population in both 2005 and 2007, as the survey estimates for smaller populations are either not reported or not accurate. This leaves 41 states plus DC and the national average. (States which are not shown have an asterisk in Table 1.)

The figure illustrates the change in income inequality over time. If all households had the same income growth rate, then the data would fall on the 45 degree line which is shown. Points above the line show states where African American incomes have grown faster than for white households and a narrowing of income gaps, with the converse for points below the line. 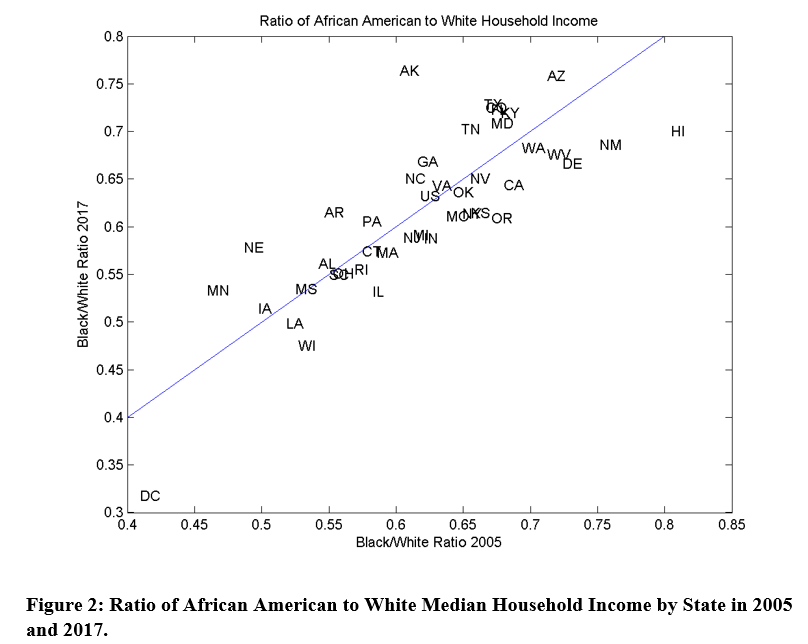 Nationwide, African American households experienced slightly faster real income growth than white households (3.3% vs 2.4%), so there as a small increase in the ratio up to 0.632. (Households of other or more than one race and changes in the composition of the population over time mean that these do not average out to the total median income growth.)  However a majority of the states fall below the line, showing that in most states there has been a widening of income inequality.

Several states warrant particular comment.  First, the black/white ratio is the smallest and fell the most in the District of Columbia, which is heavily African American (44% in 2017, down from over 53% in 2005) and where the median African American household makes less than a third of the median white household.  In absolute terms, African American households in DC make 5% more than then national average, and they have experienced slightly faster income growth than nationwide.  However they have missed out on the rapid income growth in DC we saw above, while white households saw 36% real income gains.

Alaska and Hawaii are also interesting contrasts.  Both states have relatively small African American populations (2.8% and 1.9% in 2017, respectively) and also relatively high black/white ratios (0.763 and 0.700 in 2017, respectively).  However over the 2005-2017 period African Americans gained the most relatively in Alaska, with a 29.9% real income growth versus 3.9% for whites, and the least in Hawaii, with an 11.8% decline in real income versus a 6.4% increase for whites. These estimates should be taken with some caution however, given the relatively small populations and associated high margins of error.

Finally, Wisconsin has a high degree of inequality that has widened over time. Of the 41 states that have significant African American populations, Wisconsin had the lowest black/white ratio in 2017 at 0.475, down from 0.534 in 2005. While real household incomes have been flat overall in the state, increasing by 0.1% in total, African Americans households have seen their real incomes fall by 11.4%.  In future work we will study the factors which have led to this high and increased inequality, as well as policies that to help spur faster income growth.

Table 1: Median Household Income in 2017 and Real Growth from 2005-2017.  (An asterisk * denotes states that where the estimate of the percentage of African American households was less than 1.5%.)