The decline of business dynamism in the United States has garnered considerable attention in recent years. Academic research has highlighted various aspects of this decline in dynamism, among them the rise in market share concentration, the aging of firms, the rise in mark-ups, or the disappearance of young, high-growth firms. Akcigit and Ates (2019a) and Akcigit and Ates (2019b), for instance, offer a comprehensive overview of the existing literature in addition to a theory that can account for these stylized facts. In the recent CROWE report titled “Business Dynamism in the U.S. and in Wisconsin” we focus on measures of “churning” in markets for firms and labor. In addition to the broadly established national trends, we highlight distinct patterns in Wisconsin’s entrepreneurial activity. In the process, we find that the lack of dynamism reported by the Kauffman indices, for example, is also on display in a number of other data sources like the Census’ Statistics of U.S. Businesses or its Quarterly Workforce Indicators.

We then use standard growth accounting methods and a simple theoretical framework introduced by Hopenhayn et al. (2018) in conjunction with Census data on Business Dynamics Statistics (BDS) to decompose the evolution of startup rates over time. The decline in employment growth, which in turn is driven by a decline in the labor force participation rate (LFPR), the secular aging of the population, and a drop in the population growth rate, can account for about 70 percent of the drop in startup activity since 1977, in Wisconsin as well as the United States more broadly. The evolution of the LFPR plays a major role in Wisconsin. It accounts for 2/3 of the decline in the state’s employment growth, compared to only 41 percent at the national level. Paradoxically, one explanation for the sluggish evolution of the LFPR is that the state’s level of labor force participation is high by national standards. This, however, also implies that the LFPR is unlikely to be an engine for a future uptick in the state’s employment growth rate. 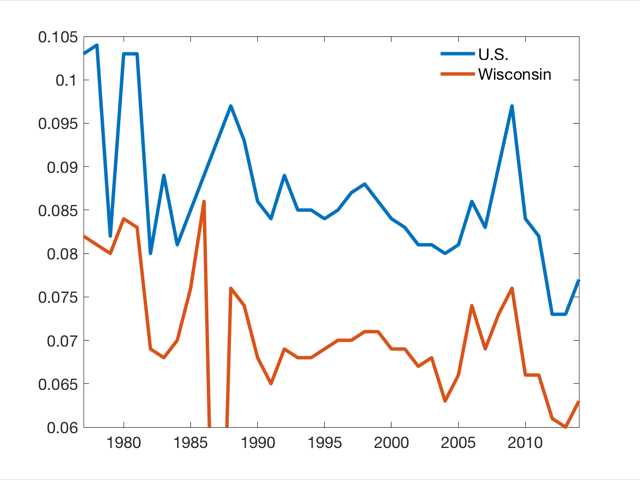 In a second step, we use development accounting methods to compare Wisconsin’s business dynamics to the broader trends in the United States. As shown in the figure, Wisconsin’s exit rate has been persistently below the exit rate nationwide. We find that Wisconsin’s low exit rate accounts for the bulk of the gap in startup activity. The low entry and exit rates are suggestive of more subdued “creative destruction” compared to the nation as a whole. Furthermore, the low exit rate in Wisconsin is associated with firms being older and larger in the state than nationwide. While analyzing the causes and efficiency consequences of the state’s “low churn” equilibrium are beyond the scope of this paper, other work suggests that the macroeconomic effects are sizeable and persistent (see, for instance Gourio et al., 2016; Pugsley et al., 2018). This is an area in need of further research and attention by the state’s policymakers.