A full PDF version of this blog post is available here.

By: Junjie Guo and Noah Williams

We use a time series model to forecast economic activity for the United States and the state of Wisconsin in 2018. We forecast that the national economy will grow by 2.4% in 2018, and the unemployment rate will fall to 3.6% by the end of 2018, a level last reached in 1969. For the Wisconsin economy, we forecast that real GDP will grow by 1.6% in 2018, an acceleration from 2017 and roughly the average growth rate since 2010. Our forecasts suggest the labor market in Wisconsin will continue to tighten, with a gain of roughly 40,000 jobs and unemployment falling to historic lows below 3%. While our forecasts suggest continued growth, there is significant uncertainty and chance of slower growth in 2018. However we find relatively little risk of a substantial economic downturn either nationally or in Wisconsin.

Since the economic recovery began in 2010, Wisconsin has experienced sustained growth. This growth is most apparent in the labor market, where the unemployment rate has fallen from its peak of 9.2% in January 2010 to 3.2% in November 2017, just off its all-time low of 3%. Unemployment alone doesn’t tell the full story, as an increasing fraction of workers left the labor force during the recession, before participation recovered in recent years. A useful summary is the employment-population ratio, which measures the fraction of the population with a job, combining the employment and participation rates. In November 2017 this stood at 66.7% in Wisconsin, the highest since early 2008 and 5th highest among states. By contrast, the national employment-population ratio was 60.1%, more than 2.5 points below its pre-recession level.

While these statistics suggest strong economic performance in Wisconsin, measures of overall economic activity reflect slower growth. From 2010:Q1-2017:Q2 real GDP grew by 2.0% on average nationally and 1.8% in Wisconsin, and year-on-year employment growth has been averaging 1.8% nationally over the last three years but only 1.2% in Wisconsin. These figures largely reflect the slow growth of Wisconsin’s labor force. In particular, the labor force in Wisconsin declined in the recession and was flat long after, only surpassing its 2009 level in 2016. The trends of labor market tightening combined with slow labor force growth underlie the nrecent policy focus in Wisconsin on increasing the labor force, as well as the increased reports of businesses having difficulty hiring, which hit 80% in the most recent WMC CEO survey.

The Wisconsin economy has diversified over time, but remains reliant on manufacturing. The manufacturing sector produces more than 18% of output in the state, compared to less than 12% nationwide. Since the recession, manufacturing in Wisconsin has experienced substantial employment growth, adding over 59,000 jobs from January 2010-November 2017, a cumulative gain of over 14%. However real output in the sector has been stagnant, growing by only 1% in total from 2010:Q1-2017:Q2. Growing employment but flat output suggests low productivity growth, which is also shown by the recent declines in manufacturing wages. Looking forward, the biggest manufacturing issue in Wisconsin will likely be Foxconn’s planned investment. But while Foxconn’s activity will ramp up in 2018, it will take time for its impact to be felt.

Against this backdrop of tight labor markets and slow but steady overall growth, we turn to our outlook for 2018. Our forecasts are based on a time series model which incorporates an array of national and state level data, and is similar to models used by central banks. We forecast the distribution of economic variables through the end of 2018, and focus on the median and bands covering two thirds of the forecast distribution. The forecasts presume past trends will continue, with future policy changes entering to the extent that expectations of these changes are reflected in current variables. For example, expectations of future monetary policy or of the recent federal tax reform have been built into current financial and investment indicators. More detail on the model and forecasts for a wider array of variables are included in our companion paper.

Developments in the national economy are important in their own right as well as being an important factor driving the Wisconsin economy. Thus we first focus on the national level, with Figure 1 reporting our forecasts for output and key labor market indicators.

The first panel plots real GDP.  Output growth has accelerated in 2017, and we forecast that year-on-year growth in 2017Q4 will be 2.6%.  The faster recent growth will continue into early 2018, before slowing slightly later in the year. Overall, we forecast that the economy will grow by about 2.4% in 2018. The other panels summarize the labor market. We forecast that the unemployment rate will continue to decrease, dropping from its most recent level of 4.1% in December 2017 to about 3.6% by the end of 2018, a level last reached in 1969. 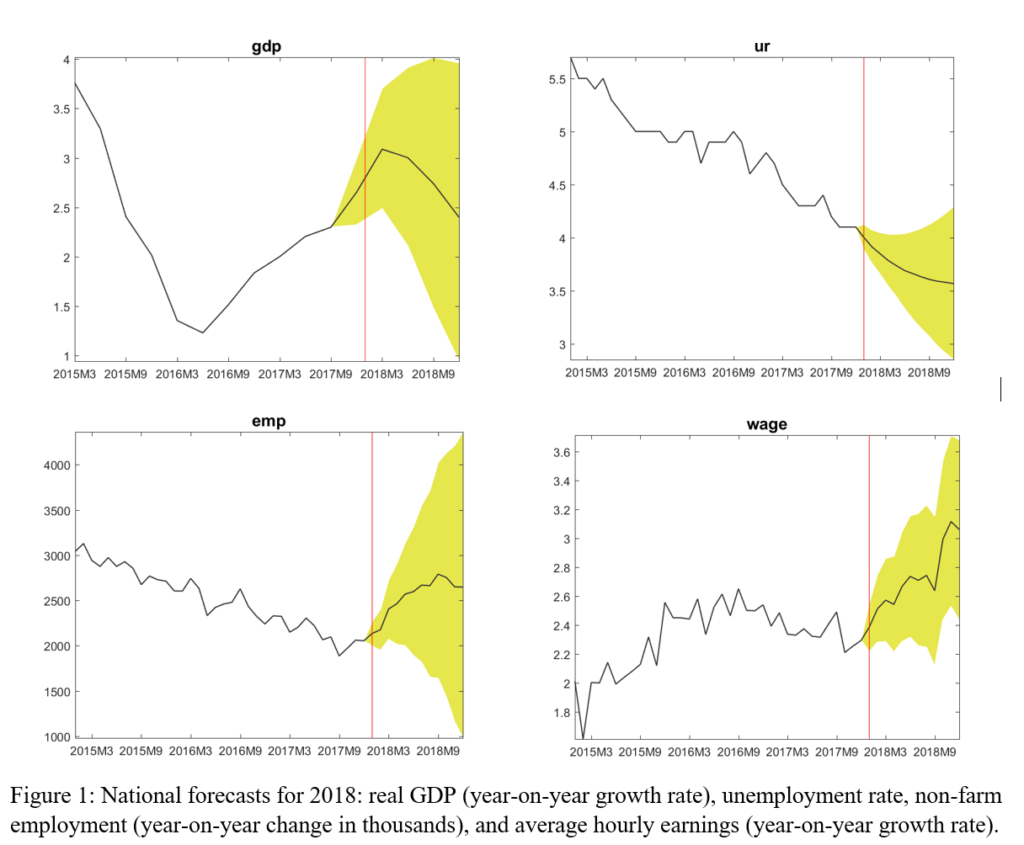 We also forecast that the economy will add about 2.6 million jobs in 2018, slightly more than in the past two years and on par with 2015. Consistent with the continued tightening of the labor market, we forecast an increase in the rate of wage growth, up from the 2.2% average growth in recent years to about 3.1%.

Thus our forecasts are consistent with a continuation of the steady economic expansion, with a slight increase in the rate of growth. However, there is a risk that the economy may slow down, with our forecasts suggesting a reasonable likelihood that GDP growth would drop below 1% and the unemployment would increase above its current level. However the risk of a substantial economic downturn is limited. In particular, we forecast that there is a 10.7% chance that real GDP will decline in two consecutive quarters in 2018, a common definition of a recession.

Figure 2 reports our Wisconsin forecasts. The first three panels are similar to the national forecasts, reporting output growth, the unemployment rate, and employment. We also plot nominal personal income growth, a broad measure of economic activity at the state level, along with the labor force and manufacturing employment, two state indicators we highlighted above. 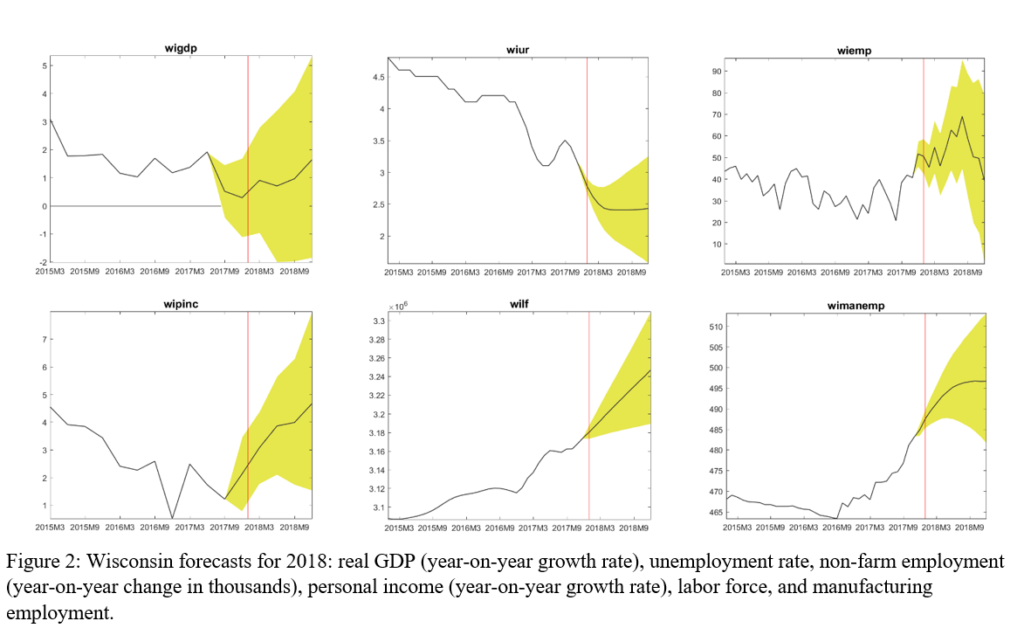 For the Wisconsin economy, the median forecasts suggest that real GDP will grow by about 1.6% and personal income by about 4.7% in 2018, an acceleration from 2017 and roughly their average growth rates since 2010. Our forecasts suggest that the labor market in Wisconsin will continue to tighten. The unemployment rate will remain low and may drop below 2.5%, levels not seen since state unemployment rates began in 1976. After having been flat for several years, the labor force in Wisconsin has grown by roughly 2% over the past year, and we project this growth to continue.  This will support the continued growth in employment in the state, and we forecast that nonfarm payrolls will add 40,000 jobs in 2018. For the manufacturing sector, we forecast that the recent employment gains will continue into the first half of 2018 after which employment will level off.

Overall, for both the United States and Wisconsin economies, our forecasts for 2018 suggest a continuation of the economic expansion with slightly stronger growth. Although there is a real chance that growth may slow in 2018, we find relatively little chance of a substantial economic downturn.